Lulu Davis is the eldest of a sister and three half brothers, and the first person of her family that went to University. At the age of 14 she already worked doing paper rounds in the neighborhood but didn’t imagine that a few years later, instead of local news, she would be promoting the work of some of the most upcoming and exciting bands in the progressive and melodic metal scene.

Fifty pounds sterling in business cards, a web domain name and a database built-in Excel during her internships at Spinefarm, The Noise Cartel, Century Media and Live Nation, helped Lulu start her own business in Public Relations and Artist Management. The office? Her bedroom.

She was a sophomore at the University of Hertfordshire, and with nineteen years old and not a dime in her pocket, Lulu promised herself she would have a job before graduating, and so created Incendia Music a startup responsible for the exposure and media coverage of relevant bands such as Brutai, White Moth Black Butterfly featuring Daniel Tompkins from TesseracT, Earthside, Voyager and Head With Wings.

“Music has helped me through some pretty tough times in my life and I think that was why I felt so strongly about being involved in this industry. I think to have an emotional connection with the music made for an easy transition into working with up and coming bands who were also playing rock and metal, and over the years my tastes have evolved and now include rock, metal, prog, classic rock and more. I just love the raw talent and energy that comes with these genres of music”.

The life of Lulu Davis is narrated by songs and also by the people she met on her way. Robbie’s father, her best friend back in high school, is Mark Palmer, who at the time was leading Roadrunner Records and now is the label manager of Nuclear Blast in the United Kingdom. This unconventional father who once wore a Slipknot jumpsuit and worked with some of Lulu’s favorite bands became her inspiration to also work within the music business.

“I had a friend in a grunge band called Junkyard at the time, and he asked me to pass on a demo to Mark and so I did. The artwork was done in Microsoft paint and God knows what the production sounded like, but I loved it. They had a track called ‘Worms’ and the lyrics went “Eat me bite me, swallow me. Eat me bite me, DIGEST ME» Now I cringe about it but I suppose that was my first ever ‘hustle’ at the age of about 14”.

Her family never imagined that Lulu would end up working in the music industry and neither would she. She always wanted to be an author, a journalist and sometimes a photographer but a strange oracle showed her the future. During Christmas, a fifteen-year-old Lulu received a Guitar Hero as a gift from one of her parents where a song by the band Therapy appeared, ten years later, is Lulu who handles the band’s PR. Her Dad feels proud.

«Our baby bands are no longer babies»

Lulu fought against the embers much like every entrepreneur when taking the freeway to success. Time management issues, fighting against the expectations of what you want to achieve and what actually can be done, plus the emotional challenges when hard times come. Any aspirant to be their own boss could easily give up, but not her.

“My personality, work ethic, and general mindset don’t compliment working for other people in an environment that limits my ideas and ways of working. I’m not sure how that comes across but that’s just how it is, and so Incendia Music has been my constant in being able to control my career, my achievements, and also to keep my motivation levels controlled in what would otherwise be what I would consider an environment that would not necessarily accommodate my need for flexible working conditions”.

Incendia Music started as a brief solution that would help Lulu to build a portfolio and break the ice in the music industry, however, what began to be a temporary income,  now is a music promotion business that has evolved due to her efforts in management, public relations and advisory.

“We’ve grown and developed alongside our artists and it’s a mutually beneficial and complementary scenario in terms of career development. We’re still working with some of the bands we started out with, which is something I love to think about”.

«Now that I have a team, it’s even more important to convey what we’re doing and why we do it»

“I feel very honored to be working with these bands still, to be honest! The fact that these talented musicians and individuals chose me to take control of an aspect of their musical career at one point or another is pretty mind-blowing. But I love it and I love them!”.

Lulu changed her bedroom for the office and is not alone now. Clarity, closeness, and creativity are the values of the Incendia Music a team prepared to overcome new challenges, especially with the support of Music Managers Forum program, the biggest community of music managers in the world.

“I have always aspired to be a strong independent businesswoman who succeeds and does a good job for her artists. I want to be respected and acknowledged for the hard work that we do here at Incendia, and especially now that I have a team, it’s even more important to convey what we’re doing and why we do it”. 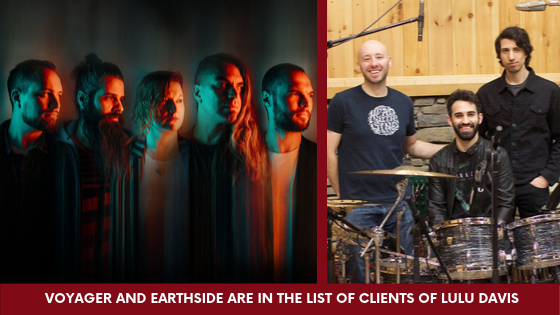 Chorus: Being a woman in the music business…and the Metal scene

“I try not to let sexism be an issue for me, although it has been in the past, and probably still is.»

Four years ago, Lulu called her friend Jerry Ewing, current editor of Prog Magazine and was very upset. The manager/agent of quite a big band told one of her clients that she gave oral sex to an American promoter she had not even met, in exchange to take the act on tour. After spreading this lie, the man told Lulu and her clients that she was everything that was wrong in the music industry.

“I always get back up every time I am knocked down. With persistence and an unwavering attitude towards succeeding, I think after a few years this attitude from certain people diminished when people started to realize that I could ‘possibly, actually, just maybe, be okay at my job”. 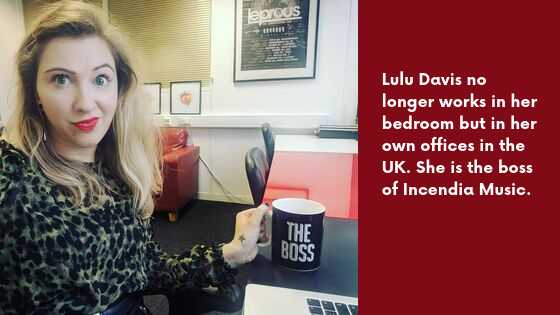 “I carry out my work these days with conviction and I tend to focus more on what I am doing for the business rather than what other people think of me. Sometimes I feel like I have to work twice as hard as some of my male peers in the same profession, and that relationships were initially harder to build because people never used to take me seriously”.

Lulu works along with a team of men at Incendia Music, however over the years has given opportunities to many other aspiring women in music, and in spite of the experiences  their lady boss had, the company continues to promote the talent of women and men in the same way, including their colleagues in the music business.

“I just do what I do to be a competent businesswoman, publicist, and manager, and if people have an issue with my work because of my gender then well, that says more about them than it does about me”.

10 tips to build a business in the music industry

This young woman from London has witnessed a growth of female managers, PR managers, and booking agents, so as there are no rules about who can or can not develop a startup in the sector, Lulu gives you these 10 tips to build a music business.

One of the biggest challenges faced by entrepreneurs in any area, including the music industry, is the lack of confidence and the impostor syndrome, repeated as often as your favorite playlist. For Lulu Davis, there is only one way to stop it.

“How can you expect other people to believe in you if you don’t believe in yourself? I wish I had guidance and someone to motivate me through this process but I didn’t, so I had to learn from my own mistakes and create a path of my own”.

“If anyone wants some advice they can feel free to get in touch. Although I don’t have much time these days, I think it’s important to share knowledge and pay it forward to other aspiring businesswomen (and men!)”.